One of the early reports says:
“In gripping, never-before-heard detail in his new book, President Bush brings readers inside the Texas Governor’s Mansion on the night of the hotly contested 2000 election; aboard Air Force One on 9/11 in the gripping hours after America’s most devastating attack since Pearl Harbor; inside the Situation Room in the moments before launching the war in Iraq; and behind the Oval Office desk for his historic and controversial decisions on the financial crisis, Hurricane Katrina, Afghanistan, Iran, and other issues that have shaped the first decade of the 21st century.

The former President offers intimate, unprecedented details about his decision to quit drinking, his discovery of faith, and his relationships with his family. He writes honestly and directly about his flaws and mistakes, as well as his historic achievements in reforming education, providing life-saving treatments for HIV/AIDS and malaria for millions of people in Africa, safeguarding the country from another terrorist attack, and other areas.”

Regardless of all the pre-reporting, we will not fully know the details until the book signing events get started…scheduled for late fall.

But, here is what we do know:

-It’s about the decisions made at the highest level in the world at the time.

-It’s done and we are all living with the results (good or bad).

1- At what point did the “problem/crisis/issue” get to his desk and become his?

2- What level of “commitment” was attached to the problem/crisis/issue?

3- What was and how was the critical “solution” developed and assigned?

4- What were the specific “actions” and timeframes needed for execution?

Of course, these are the four steps in the MODELTM of the book Zillion Dollar Thinking TM.

As such, we will be most interested as to what (if any) model was followed and to find that it was used consistently with each of the decisions that will be proffered. It should be easy to detect.

Difficult decision making is the hallmark of leadership, and this president was challenged with some of the most critical issues of that office. Personally, I look forward to the decision categories, but more importantly, the methodology behind each one of them. 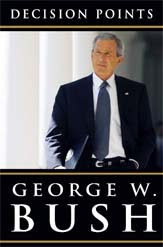