May 9, 2011
Filed Under Uncategorized 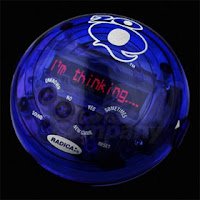 Radica gives the classic 20 Questions parlor game a high-tech twist. The palm-sized 20Q device will start asking questions that can be answered by pressing buttons that read “Unknown,” “No,” “Yes,” or “Sometimes.” By the 20th question, it will generally know your answer. The toy contains a database with thousands of target words. As you answer questions, it uses artificial intelligence, fuzzy logic and psychographic profiling to zero in on the word and, many times, a decision.

That’s a scary measure of brainpower for a $10 toy.

“Handwriting Recognition, Artificial Intelligence, Fuzzy Logic and wireless gadgets are hot at the Toy Fair. They can recognize handwriting, receive wireless data from TV shows and read minds through artificial intelligence. “Kids live in a high tech world so, now their toys are going to be high-tech.”

Is a form of algebra employing a range of values from “true” to “false” that is used in decision-making with imprecise data, as in artificial intelligence systems.

It is logic based on the concept of fuzzy sets, in which membership is expressed in varying probabilities or degrees of truth — that is, as a continuum of values ranging from 0 (does not occur) to 1 (definitely occurs). As additional data is gathered, many fuzzy-logic systems are able to adjust the probability values assigned to different parameters. Because some such systems appear able to learn from their mistakes, they are often considered a form of artificial intelligence. Applications include expert systems, self-regulating industrial controls, and computerized speech- and handwriting-recognition programs.

Artificial Intelligence (AI) is the area of computer science focusing on creating machines that can engage in behaviors that humans consider intelligent. The dream of smart machines has become a reality. Researchers are creating systems which can mimic human thought, understand speech, and countless other feats never before possible. The military is applying AI logic to its hi-tech systems, and certainly in the near future, Artificial Intelligence will impact all our lives.

As a profiling marketing term; it is a combination of psychology and demographics that makes the marketing responses of those groups different from those of other groups. Understanding a group’s psychographic profile and its relationship to its neighbors is a critical component of high tech marketing.

Like all of the other RED FLAGS that are being floated out there to attract and influence the impressionable minds of our children…these devices need to be taken seriously and carefully monitored.

As always…you decide (this one is for the kids).